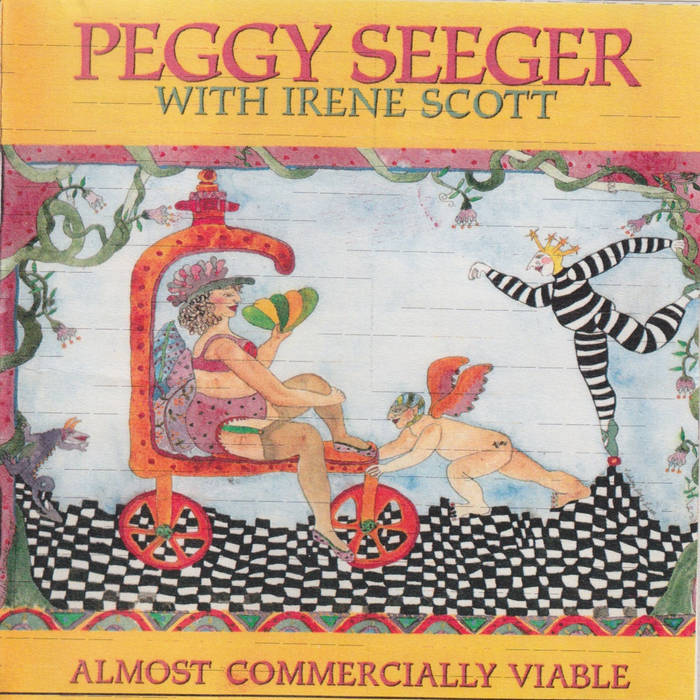 
A singing duo brought together by politics, Peggy from a professional musical household in Washington, CD, and Irene Pyper-Scott from a traditional working class home in Belfast, Northern Ireland. With the strength of friendship and the necessary sense of humour, they flew all over the world, carrying boxes of cassettes, a change of clothes, two guitars, a five-string banjo, an Appalachian dulcimer, an autoharp, a concertina, and a pair of spoons (hoping to find a piano and a pot of fresh coffee on every stage). The songs on this album are political, loving, sad, angry, funny and sharp.

Their name and the title of this compact disc came about one cold, wet, and dreary night in February, 1990, Peggy's longtime singing partner and lover, Ewan MacColl, had died only four months before. Peggy was exhausted and unable to carry on her usual workload. So, while on tour up north, they arranged to meet with a prospective manager. The setting (not of their choosing) was an enormous, tawdry, mock-period roadhouse in South Yorkshire. It was completely empty except for silent bar staff.

They ordered two beers and seated themselves. Before long, a smallish, middle-aged man, complete with leather jacket, ponytail and bulging Filofax, strutted into the bar. The introductions were, at best, perfunctory and before long Peggy felt that all was not well. The little man seemed to be riding roughshod all over her. Excusing herself, she retired to the ladies. The Autumn Rooster took this opportunity to lay his cards on the table. Turning to Irene, he said, "Well! She's No Spring Chicken, is she? And she's not exactly Commercially Viable."

Peggy remembers his name well and would like to meet him in a dark alley sometime. Irene, uncharacteristically, was more diplomatic. She named our duo No Spring Chickens and dubbed the album "Almost Commercially Viable". The most perfect of perfectionists, she also directed and produced the album. Peggy considers it one of her most listenable albums. Irene still has a few little faults she wants to tweak, move or REmove ...

Peggy and Irene no longer sing together but the CD lives on. It was first issued by their company Golden Egg Productions (the music being organic and free range), appearing on cassette (Grade 1) and on CD (Grade 2). The CD has two more songs than the cassette. Vintage cassettes are available from Peggy (information on the Discography section). Golden Egg Productions has ceased laying and the CD is now issued by Fellside Records in the UK and by Sliced Bread in the USA.

Arrangements by Peggy Seeger (PS), Irene Pyper-Scott (IS) and the instrumentalists.
Published by Golden Egg Productions. All rights reserved.