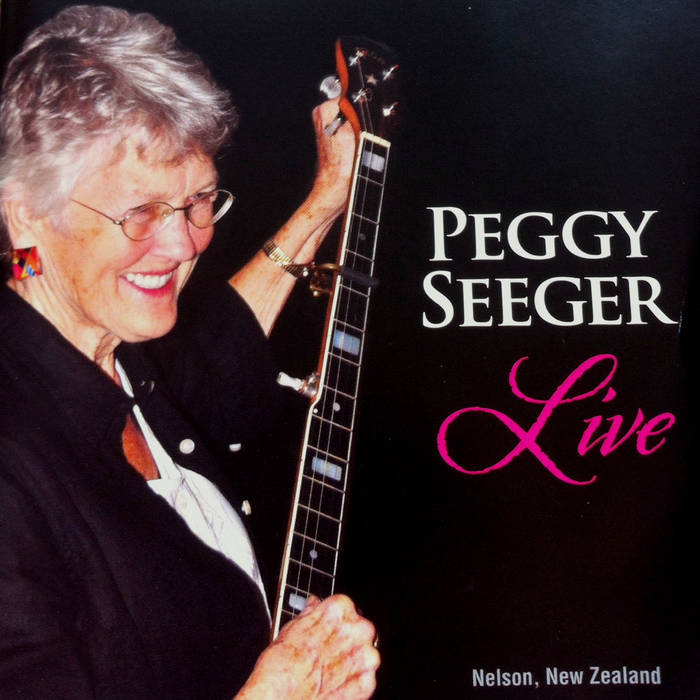 How appropriate that Peggy Seeger’s new Live CD was recorded on a stage in New Zealand to raise money for an arson-damaged local women’s centre. The pioneering feminist songwriter, “acknowledged as an esteemed interpreter of traditional material and a gifted instrumentalist” (Billboard), has a long history of activism in her native U.S., adopted English homeland, and elsewhere. Occupy London? She was writing and singing for the cause last fall.

Live radiantly showcases Peggy’s clear, ageless voice and skills on piano, banjo, and guitar in a mostly solo setting. The CD’s 23 tracks, recorded in 2010, are split between a variety of American folk songs, Peggy’s trenchant originals and often hilarious spoken word interludes and poems. Her only previous live album, Three Score & Ten (Appleseed, 2007) was an all-star UK celebration of her 70th birthday that included older Seeger brothers Pete, the worldwide folk/activist icon, and old-timey music practitioner and musicologist Mike (since deceased), the only recording of the three siblings performing together. (Appleseed released Mike’s final recordings, Fly Down Little Bird, a duo CD with Peggy, in 2011.)

For traditional American folk ballads, Live includes the playful “Mountaineer’s Courtship”; a nimble “Sally Goodin/Sourwood Mountain” medley; and the cautionary “Fatal Flower Garden,” “Country Blues,” and “I Been a Bad Bad Girl,” the latter first recorded by Alan Lomax from the singing of a Florida prison inmate in 1926. Among the songs from Peggy’s own pen are her trademark “I’m Gonna Be an Engineer” (lovingly referred to as “[her] albatross” on the recording); “Missing,” about one of Chile’s “desaparecidos” (those missing after Salvador Allende’s takeover in the early '70s); and her previously unrecorded “Everything Changes,” a gently heartbreaking plea to “Mama’ that “it’s late/Time to take me home,” written for her late mother, Ruth Crawford Seeger, considered the foremost female composer of modernist music in the 1900s. The track is preceded by the sad wonderment of the poem, “My Mother is Younger than Me.”

Peggy’s sung and spoken observations on the eternally unstable dynamic between genders help make Live such a well-rounded and satisfying listening experience. She sarcastically responds to the canard that women’s monthly hormonal imbalance makes them unfit for high office and important jobs on “Everyone Knows,” and rues a male baby’s “little spike of flesh” that entitles him to those options on “Give ’Em an Inch.” The spoken “Make Love Not War,” “How to Impress a Woman,” “Eagle and Condom” and “The Personals” are all tart hand grenades into sexist pomposity.

Peggy just finished her final tour of the US in mid-April 2012. It’s not her age – late seventies – that’s the issue. “The reason is the airlines, chiefly . . . and the [driving] distances” between shows, she told the Sydney Morning Post. She will, however, continue to tour in the U.K. and some European countries. But if you’ve already missed her shows in the States or want to be reminded of that great Seeger show you just saw, Live will satisfy your cravings.